The cultural transition from waterfall to an agile approach

The only way to survive in the world of business is by evolving according to the market forces and the latest technologies. The transformation to the agile environment is one such process being undertaken by the corporate world in the 21st century. The transformation towards agile methodology provides flexible work method, time efficiency, accuracy and better results. However, moving from the waterfall approach towards the agile framework brings with itself a lot of transitional changes and one such important change is the cultural transition that the developing teams have to undergo for incorporating the scrum technology in the pre-existing environment. To know more about Scrum Master Certification please visit StarAgile site.

The struggle of transition

There are many battles that a team has to win in order to get the victory in the ultimate battle of transitioning to the agile framework. The following table lists the few struggles that one has to undergo- 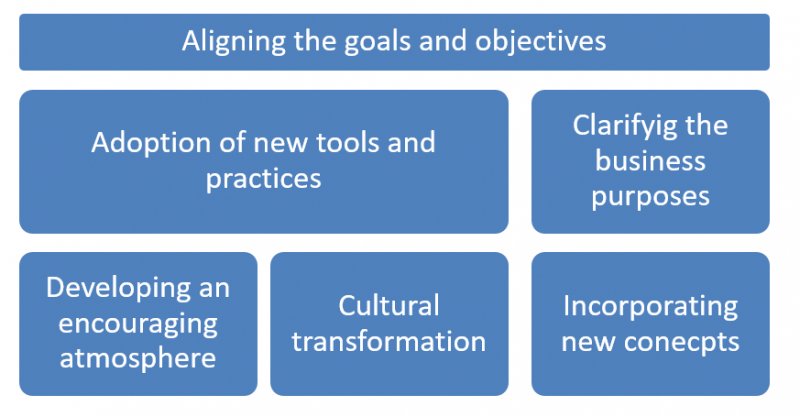 The clarity of vision and objective is the most important aspect while transiting from the waterfall concept to an agile framework. Once the whole team is clear on this, it becomes easy for the team member to draw his/her path to make the transition happen; similarly the stakeholders must take care of developing an encouraging atmosphere for the members so that it becomes easy to grasp the new concepts. The mentoring and guidance at each step is the supreme tool for an easy and effective transition. An expert can help the smooth transformation by incorporating his experience and by acting as a guiding torch for the people under work.

Cultural urges to improve the probability of success while transitioning

In the traditional approach, there used to be four types of cultures that were existing in a business model. These were power culture, role culture, task culture and person culture. The power culture involves the environment in which the power is concentrated in a few hands and they are surrounded by a few powerful people taking the necessary actions. Here the involvement of the whole team never took place. In role culture, the basic bureaucrat fashion is followed in which all the communication process is followed from top to down and horizontal, in task culture, all the focus is on completing the task on time and the communication is done only within the cluster involved in completing that given task and in person culture all the members of the whole business arena come together for exchanging skills and other recreational activities.

In scrum framework all of these cultures don’t exist. Only task and person culture are of some importance, two other cultures are almost obsolete in this respect. However, a few elements of all the cultures are incorporated but the above two mentioned are of more prominence. So the transition is not to the entire new concept, it does have some overlapping with the pre-existing framework.

Steps involved in cultural transitioning of the team

Broadly mentioning, there are three steps which need to be considered to lead towards the better cultural transitioning. These are the mechanics of Agile, the positive mindset and the technical skill.

The cultural transitioning is not an entirely isolated process, it has many overlapping features with the traditional approach. However, the cultural transition forms a backbone for any framework to be incorporated. So to have a proliferating business, a culturally evolved environment can give ma more smooth base for the effective agile transformation to take place.