How To Benefit From Pinterest’s Innovation

Pinboard photograph sharing website Pinterest has enjoyed one of the big internet success stories of the past couple of years and the site’s simple photo-centric design, pared-down aesthetics, accessibility, and ease of use, has caused web designers everywhere to consider reimagining their designs.

Pinterest has proved to be very popular among women and many of boards created by users are themed around food, interior design, architecture, fashion, art and design, crafts, weddings, holidays, events, humour, films, and much more. Although a young enterprise (the site was launched in 2010) it has attracted an enormous number of new users and impacted on the web as a whole. Even Facebook were scared into a redesign! Pinterest are, however, all about innovation, so we take a look at their glorious creativity and see how you can benefit.

Pinterest allows users to create virtual pin boards by adding images, recipes, and other items. Images are known as “pins” and may be added to boards either by uploading them from users’ computers, or collecting them from the internet by clicking on the “Pin It” button you can install. The latter method provides a link to its source on the internet.

The Pinterest homepage contains a rolling newswire which updates as users add more pictures. Its design is so basic and yet immediately intuitive, with pictures neatly slotting (as if like Tetris blocks) alongside each other down a scrolling page. Its aesthetic value is staggering in its simplicity, but it is also a beautiful design and one which immediately spawned hundreds of impersonators.

The Influence of Design 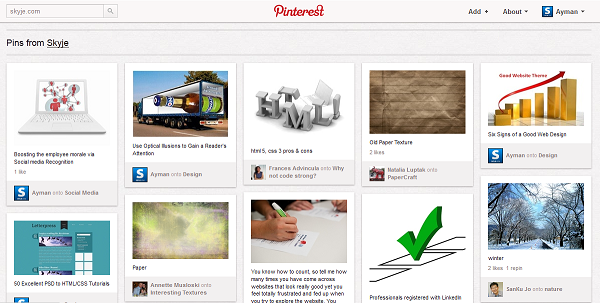 One of the most distinctive aspects of Pinterest, and a large part of the site’s success, is its brilliantly simple design and visual presentation. Users can layout their boards by filling sticky-note sized blocks, with each block usually dominated by an image, and fill the browser screen with these posts. Each block has the options to Repin, Like or Comment and features a link to the image’s source. Users’ homepages feature a news feed of pins from the people and boards they are following. Users can then repin these items and create their own boards with themes based around their interests.

Unlike Facebook and Twitter’s reverse chronology system for organizing posts and updates, Pinterest uses a non-linear hierarchy for organizing boards and this has proven to be a big hit with users. Due to this success, and the brilliance of its design, there has been quite a stir in web design. Many new sites have begun using a similar approach to visual organization and building block arrangement of posts and images. Furthermore, some major online players seem to be emulating the site’s design and functionality. Leading the way here has been Facebook – their recently redesigns have incorporated Pinterest’s design with emphasis being on aesthetic values. Their explanation for this has been given as the need to meet user requirements for smartphones and tablets, although the likelihood is they needed to challenge Pinterest’s visual appeal. It was a blatant move by the major brand, and a true sign of Pinterest’s growing power as a brand.

As Pinterest state very clearly in their work ethic, they are all about innovation. No doubt they’re not too impressed by the overt copycats who have, effectively, stolen their designs, but it is a huge complement to have the likes of Facebook being panicked into an overhaul. Although Facebook is far ahead of Pinterest in terms of unique visitors per month, the social media giant could be reaching saturation point with user numbers leveling out. This means Facebook has to fend off contenders to its throne, and as a consequence there are redesigns.

Elsewhere, Google’s attempt to add a “social spine” to all of its sites and apps in the form of Google+ has met with a fairly mixed response. Although there are a huge number of registered Google+ users this is partly due to Gmail account holders being automatically upgraded to Google+. The social media tool itself hasn’t been overly effective. In contrast, people who sign up to Pinterest seem far more likely to remain active on the site – it is thought 40% to 60% of new users will continue using the site. These are very good figures indeed, so what is the key to this success, and can you benefit with your designs?

Innovation is clearly key, you may also consider opening up a Pinterest account for your site. Adding the Pinterest tab to your brand’s social media accounts is a big positive, but it would be wise to actually do something with your account. Don’t just let it sit there lifeless. With regard to website design, a radical overhaul is likely not necessary. It wouldn’t be wise to blatantly steal Pinterest’s efforts, purely on the basis this is now so overt. Instead, consider using your Pinterest account alongside subtle changes to your site’s design. Give your website a thorough once over and fix areas which are poorly designed or in need of some new content. It seems a successful website is now a streamlined, perfectly working one, so hone down the imperfections and get creative of Pinterest. Coupled together you will connect with your audience and boost your popularity.

Alex Morris is a writer, and part-time designer, for a ink and toner cartridges firm in Manchester. Our ink cartridges come in handy for printing off Pinterest’s stunning pictures. Yes, he’s one of the few, it seems, male users of the service.