When an Astronaut Loses Space: 10 Killer Photos of Astronaut Suicide

A lot of people, in one way or another, have experienced losing a job. Whether it was because of downsizing, resignation or firing, one would at least have the faintest idea of how it feels to become part of the unemployment statistics. Nevertheless, people usually manage to bounce back into the workforce—chefs go back to kitchens, nurses go back to hospitals, teachers go back to schools, and so on.

But what if it’s an astronaut who loses his or her job? Would there be another “outer space” that s/he can move to?

Such scenario is the inspiration of Astronaut Suicides, a controversial art photography project of photographer Neil DaCosta and art director Sara Phillips.

In 2010, US President Barack Obama announced that it was time for the National Aeronautics and Space Administration (NASA) to focus on more radical space technologies instead of returning to the moon, which, according to him, is a place America has already been to. Thus, in July 8, 2011, Space Shuttle Atlantis took flight for the last time to deliver and replenish what was left of the supplies in the International Space Station.

After 13 days, Atlantis came home for good as it landed back to John F. Kennedy Space Center on July 21. Overall, Space Shuttle Atlantis has completed 33 missions since it was first launched in 1985.

Eulogy to the Space Shuttles

To commemorate the end of the space shuttle era, DaCosta and Phillips decided to come up with a visual art project depicting the sadness that comes along with the last space shuttle expedition sent into the outer space. And what better way to show how depressing it was than through an astronaut in complete spacesuit regalia, ending his/her own life.

Shot in Portland, Oregon, Astronauts Suicides features a series of colored photographs showing an astronaut committing suicide after finding out that the outer space program s/he is in is facing cessation. The white spacesuit (including the helmet) is practically unlabeled except for a patch of the American flag. It was loaned to DaCosta and Phillips by a prop house in Hollywood.

The following are some of the most notable photos in the collection, with each scene creatively depicted in artistic imagery with white minimalistic background, laced with dark humor and the artists’ unique flavor of irony and sarcasm. 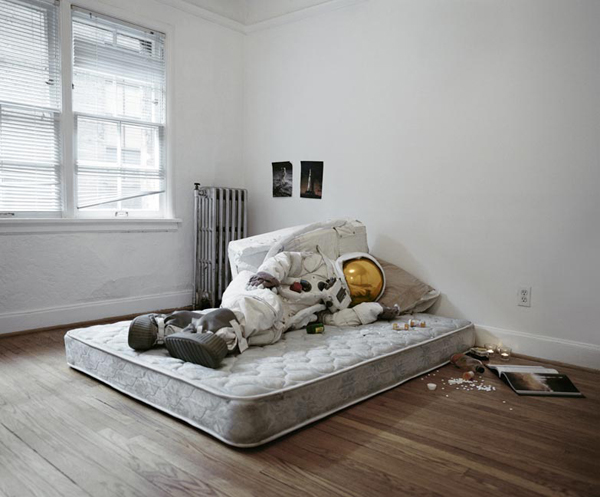 Obviously alone in an empty apartment, this astronaut overdosed on pills, not minding whether anyone finds him/her.

This astronaut sure knows the classics as s/he tried to pull off an aeronautical version of American poet Sylvia Plath’s suicide. 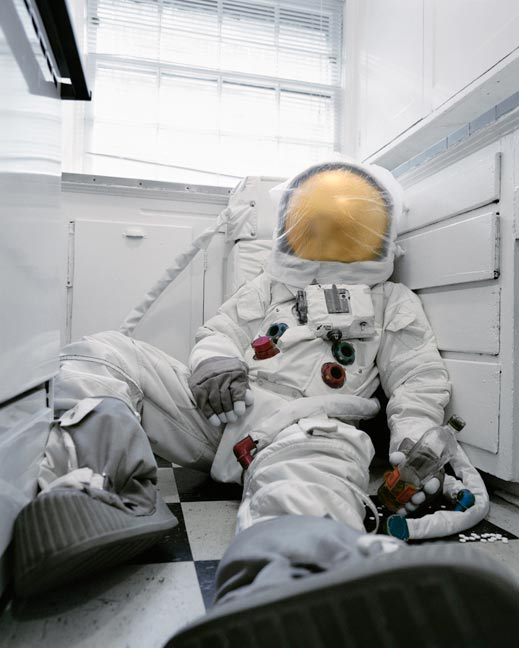 Sprawled in a corner of the kitchen, this one used two stones to hit a single bird by resorting to alcohol poisoning and suffocation. 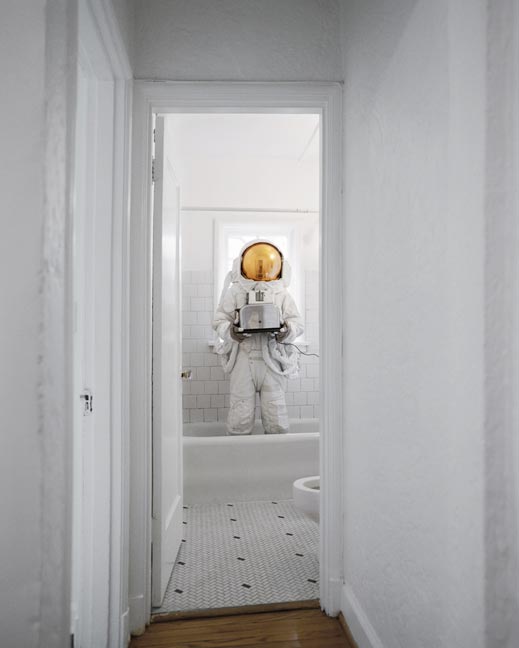 Slow and painful death was this one’s cup of tea, as s/he took a plugged radio to the shower for electrocution. 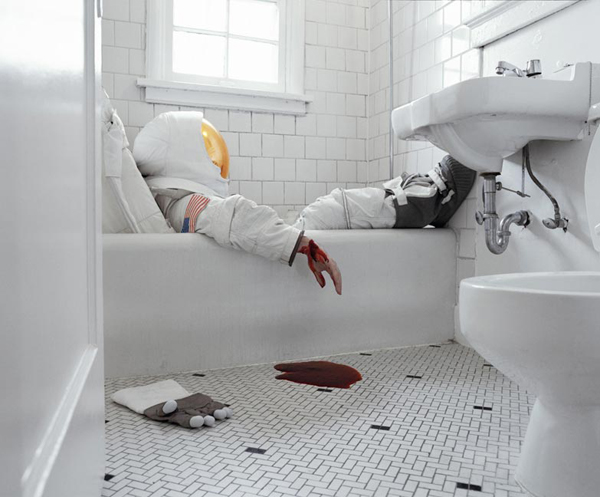 Space or the lack of it did not matter, as this astronaut squeezed him/herself in a small bathtub, slit his/her wrist, and bled to death. 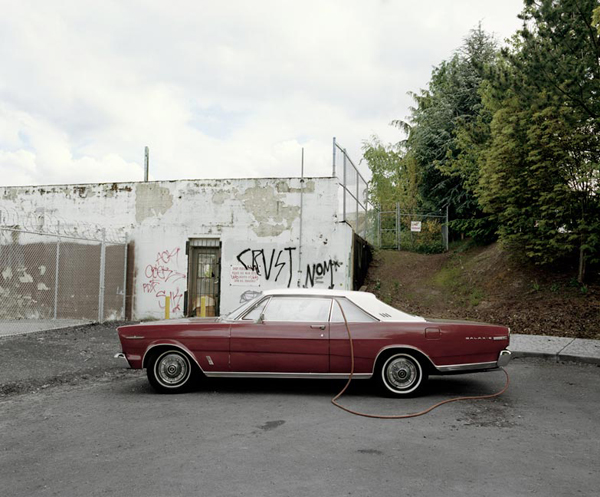 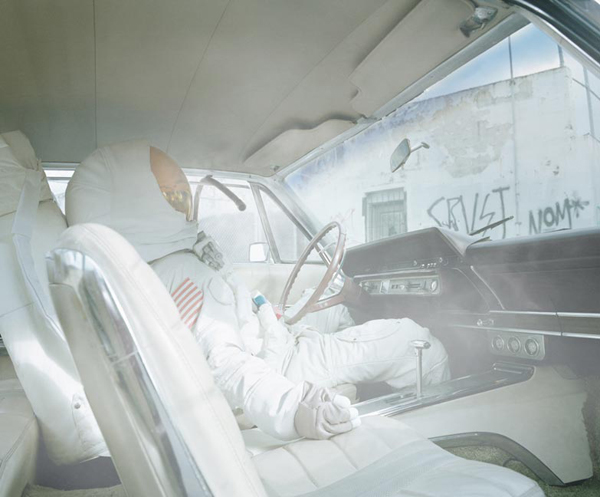 DaCosta and Phillips alludes to literature yet again, as the scene in this photo takes inspiration from American poet Anne Sexton’s suicide via carbon monoxide poisoning. 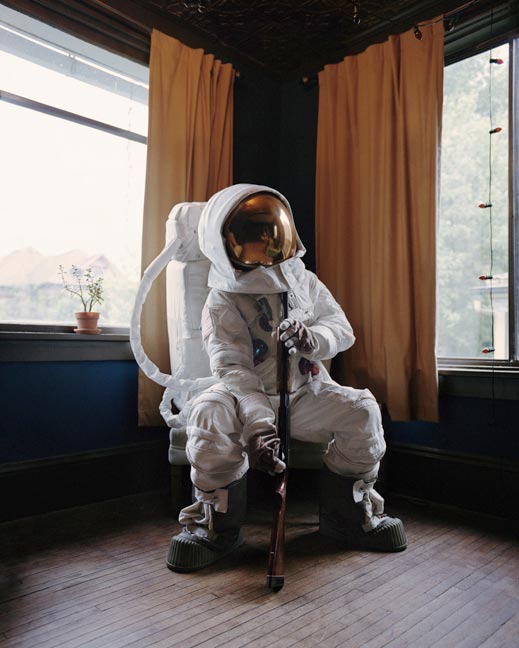 If he didn’t become a space guy, this astronaut could have been a rock star, emulating the late Kurt Cobain of Nirvana when he ended his life—minus the towels. 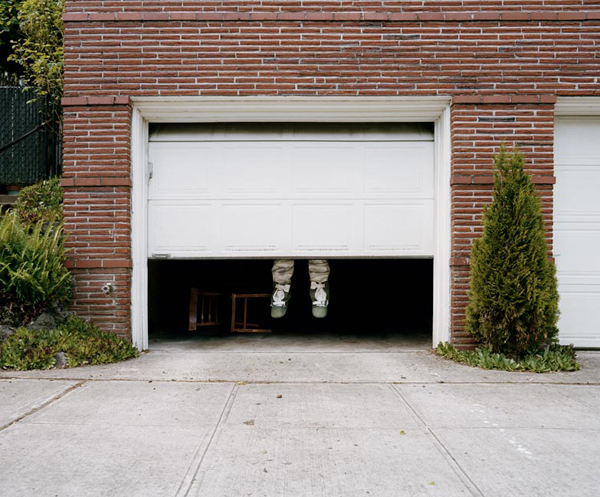 Hanging oneself is often, if not always, considered a classic and highly dramatic way of committing suicide given the amount of preparation (and determination) it requires. This astronaut, though, didn’t seem to mind. 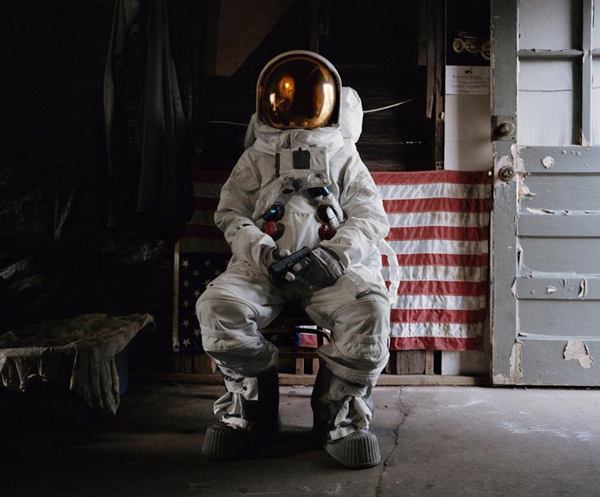 While this one does not seem to be dead yet, s/he would most likely be in a little while, as s/he readies himself to pull the trigger of the pistol in his/her hand. 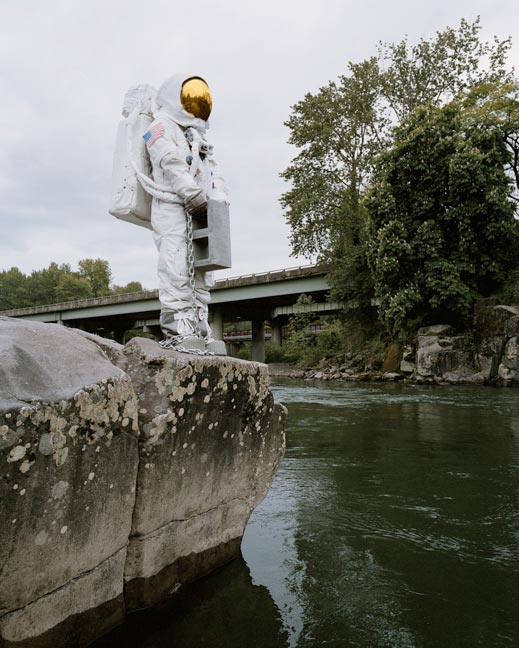 This photo may be quite humorous but considering the combined weight of the cinder block, the metal chain and the spacesuit, there surely won’t be any rising back to the surface for this agent of space.

Since the publication of Astronaut Suicides, there have been varied opinions among those who have seen it. Some thought of the photos as genius, symbolic and humorous. On the other hand, there are those who believe that suicide is a sensitive issue, and thus does not deserve a comical approach. This difference in people’s judgment goes to show that an artistic concept combined with a controversial issue can arouse different emotions.

What about you, what do you think of these photos?

Vincent Sevilla is a graphic designer and a marketing consultant for Uprinting.com, an online printing firm that prints canvas and various printed marketing media.