What does smart phone means to you?

In the recent days the term “Smartphones” is really tossing up a bit around the globe. But it will be really interesting to wonder what is this smart phone and how it is differing from day to day use cell phones. One should definitely wonder these days that are mobile phones only meant for calling facility? Is there no other facility that a mobile phone can give you when you know that the world is reaching new heights in technology continuously? Well, the answer is a smartphone. 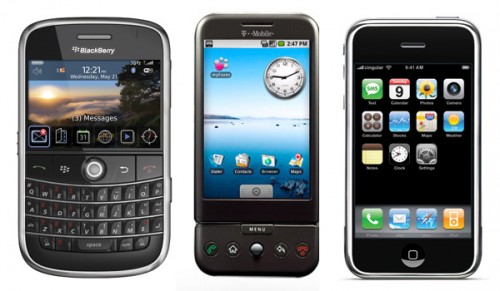 In a nutshell, a smartphone can be defined as a device that enables us not only to make calls but also provide other features, which in the past, we used to get from computers and PDA’s such as sending and receiving mails and editing office documents. If we look into the past, cell phones were used for calling and texting only. Eventually cell phones added computer features and it finally resulted in the origin of smartphones. Smartphone was actually a term pointed out by the marketers to differentiate their PDA cum phones from the rest of the pack. It is basically a cellular telephone which has built in apps along with wide internet access and facilities like text messaging, web browsing, mp3 players and maybe video calling .In addition to this a smartphone can run myriad applications.

Key features of a Smartphone

There is no standard definition of the term “Smartphones” found across the globe. So it will be really helpful to point out some of the basic distinctions why everyone is differentiating it from cell phones. So here are the main features:-

Generally, the operating system(OS) will enable the user to run applications and do any other personal jobs .Here are some of the examples of operating systems used by the modern day smart phones.

The iphone runs the iOS

Most cell phones even the ordinary ones includes some sort of software and the basic models include an address book or some contact manager. But as this is a smartphone so it will allow something definitely more than the ordinary phones. It allows us to create and edit microsoft documents, in viewing files, also allows us to download applications such as personal and business finance managers, handy personal assistants.

Web browsing is definitely a key feature and one can access his favorite sites or download apps from the net. Thanks to the inventions of modern day, that high speed net surfing technologies such as 3G, 4G and also the wireless LAN (wi-fi) that are introduced in the cell phones.

The GPS functionality is what makes a smartphone look smarter.

And with the addition of google maps to the mix a complete navigational kit is found inside it than the other devices. Using this app one can easily find their way in a city or a less populated place. Applications like Heyway makes things easier that the person will no longer have to take info from others while travelling.

Smartphone have enough rooms for one to store enormous amount of data. One can easily store their required pictures, documents, songs, videos, apps in it itself rather than needing a flash drive or hard disks or floppies to store it. Smartphones allows us to store data as high as 32 GB-80 GB and above.

Tiny in size though but a breathtaking quality such as HD, bluerays, HQ pictures and videos are offered by smartphones. The video quality is rich bright vivid and some smartphones offers 10 megapixel camera resolution and 1080p recording facility.

Word processing, spreadsheet application, making presentations slideshows are accessed in smartphones anywhere anytime, which were the common features of desktops and laptops in earlier days.

So from the outlook it is evident that a smartphone is quite efficient device and a swift tool with all the abilities of a laptop or pc which will force someone to buy a smartphone rather than desktop.

Overall the simplicity and intuitiveness of smartphone that comes first into the users mind before arguing whether to buy a smartphone than a laptop no matter how expensive it is.

Claudia is a blogger by profession. She loves writing on luxury and technology. She recently read an article on portable printers that attracted her attention. These days she is busy in writing an article on Micro scooter.