3D printers and products are slowly but surely making their way into our lives, albeit without our knowledge. Hundreds of products are being built and serviced by this software based electro-mechanical device and the numbers are growing every day. 3D printing is no longer a pipe dream or a novelty. It has turned into a serious business proposition which is not only economically viable but promises to disrupt the traditional manufacturing arena with its unique features and cutting edge technology.  That it will affect humans and lifestyle in the coming years is an understatement.

However, its full potential is yet to be exploited by several business enterprises. Mentioned below are top 8 industries where 3D printers can make a big difference. 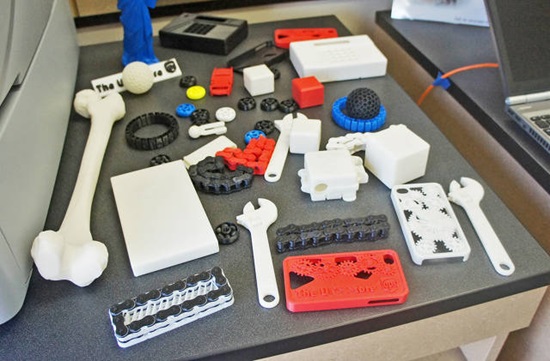 Although manufacturing was the first industry to recognise the potential of 3D printing technology, it limited its exploitation to just prototyping and miniature modelling chores. With the advent of several gigantic 3D printers the same manufacturers were quick to spot the advantages of such a unique tool. Because 3D technology is based on additive printing it offered a flexible option to build complex prototypes and also batch produce critical medical and aerospace components. Today, renowned companies such as GE and Boeing are using 3D printers to manufacture several high performance general and vital parts for their sophisticated machines.

As mentioned earlier, several leading manufacturers are still wary of using this amazing tool. However, the numbers are coming down as these businesses realise that manufacturing components with 3D printing is cheap, quick and litter free. Yes, traditional manufacturing process produces large amounts of scrap or wastage which damages environment beyond repair. 3D printing can help manufacturing sector reduce their carbon footprint and thereby contribute to the concept of ‘Green Earth’.

One of the ways to maintain leadership in any competitive business environment is cost cutting. This results in manufacturers and other enterprises turning towards third world countries or regions which offer components and services at lower cost. This mass movement of component outsourcing has today reached monstrous proportions. However, such companies have realised that outsourcing in the long run costs them more in terms of supply chain management, rejections, co-ordination and communication, not to mention large amounts of wasted inventory.

In such a scenario 3D printer offers a great solution. Parts can now be built quicker, cheaper and in small quantities. It also means bypassing transportation and logistics completely. Imagine a cluster of 3D printers offering manufacturing facility, close to the parent company? It would simply change the entire offshore concept.

Development and generation of unconventional energy is yet another arena where 3D printer can make a big difference. Millions of people in many African countries and regions in South East Asia still spend their nights in darkness. Air turbines, water turbines, conversion devices such as those which transform rotational energy into power are some of the areas where inexpensive devices built via 3D printer can brighten up the lives of these people.

Prototypes can be built before actually manufacturing such portable energy producing gadgets. It simply reduces R & D expenditure and the cost of the final product. Hand driven and pedal driven devices have immense potential in terms of generating power and storing them for later use, typically during emergencies. A 3D printer can help designers build such machines.

3D printing is also making an impact on the real estate front, albeit in a small way, as more and more entrepreneurs are setting up shop close to large manufacturers. The mushrooming of small units boasting 3D printers and creative minds has definitely increased the prices of industrial units and property rates. The rise is likely to spike in the coming years as large manufacturers outsource their wares from these small enterprises.

There was a time when ancillary units sprung around huge manufacturing houses and factories riding on the “Outsourcing” horse. Today, 3D printing shops are adopting the same strategy. Incidentally, industrial land prices jumped even then.

Custom designed farming tools and parts can change the life of farmers and agriculture landscape. Tractor and associated equipment can be developed specially for those farmers who are looking out for mechanised systems albeit at an affordable price. With 3D printing, and through innovative designing, low-cost machinery such as tractor can be developed. This is possible because of 3D printing’s additive feature and its versatility in quickly fine-tuning prototypes.

All around the world there are millions of gadgets, devices and tools which are languishing in one corner due to unavailability of parts, and the reason for its shortage is lack of demand. It is just impossible for any manufacturer to batch produce as the cost of such a component will most likely surpass the cost of the entire product. However, this trend is about to change. 3D printer can produce even a single piece and that too at a very competitive price.

Replacement parts business thrives on those components which are susceptible to frequent damage or degradation. While large manufacturers do offer these components, their delivery period is typically based on “numbers”. A 3D printer, like mentioned above, can deliver obsolete components without any preconditions.

The effect of 3D on IT sector will be huge in the coming days. In fact one of the core integrated software, the Enterprise Resource Planner or the ERP will need to be fine tuned and tweaked  as many of its integrated applications that control various facets of an operation, such as product planning, development, manufacturing processes, sales and marketing will be greatly affected.

Inventory control, buffer stock, planning, product designing will be the thing of the past. If 3D printing actually grows in terms of numbers then software related to manufacturing and business will undergo massive change. The rigid rules of current ERP program will need to be softened or completely discarded.

The impact of 3D printing on the said category will keep intellectual property attorneys busy all the time. People who build their own components and products will have to safeguard their creation and make sure it is protected by the concerned law. Things may get fiery in case designs are plagiarised during manufacturing and designing stage. Whatever may be the outcome, the one thing 3D printing guarantees is an exciting future.

Jean Grey is an online blogger for IPrint Technologies. She like to blog on different tips for using 3D printers. For more information visit http://www.iprint-technologies.com/3d-printer-kits/