When two are fighting one against other, an old saying teaches us that a third one may win. Applied into the world of social networks, the fight between Facebook and Google+ may be the perfect launch for another impressive network. Anyway, the Internet users will get bored of the same idea and surely, the next phenomenon will bring something new on the market.

Zurker is a special network and the features of it impress any person having barely low acknowledgment about social media. First of all, everything is different, if you were actively on Facebook, Google+ isn’t something unseen before, while Zurker it’s really something new. Secondly, by surfing on Zurker you get some monetary incentive, you may not be able to spend all your life in Ibiza with the money you make, but there is an amount of money that may be gained. Here are some features of this network that, certainly, will make you reconsider what you thought about social networks. 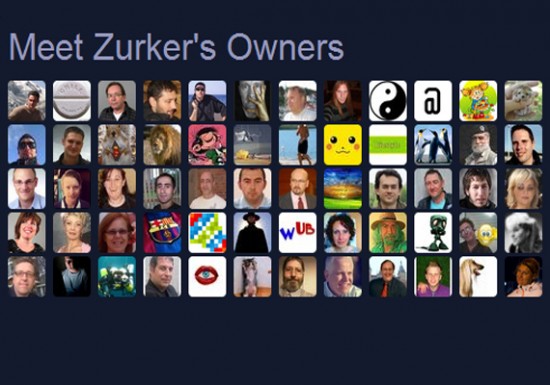 The brilliant idea is that no one owns Zurker, and the owner doesn’t receive the profits made. Any user may buy vShares; being very similar to the idea of own currency and when a pre-determined number of vShares is reached these are converted into real money. Depending on the number of vShares you own, you may obtain a good profit.

The problems of Facebook security are well known and many people are scared that it is possible for someone to profit from these gaps. Zurker creators promise that these issues won’t be allowed on it and each one may do whatever he wants with his privacy. That sounds pretty fair: if you don’t want to be noticed by everyone, restrict the access, if you are more libertine, then everyone may see your activity.

I am seriously in doubt if someone appreciates the never-ending invitations to an online party or to enjoy a new game. The matter of spam is very debated, but it seems that there is no recipe to control it. Zurker will be the place where spam will be radically reduced or even annihilated. Once it will be realized, truly the chances to become an important rival to current social networks are high. 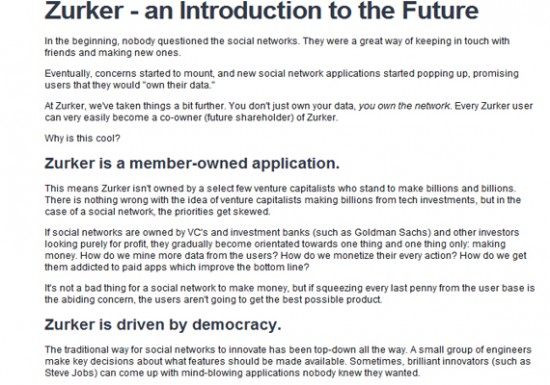 Another promise of the Zurker developers is that, here, the climate will be more positive. Honestly, I don’t have any clue how it will be possible, but the idea is simply awesome and I’m dying to see the materialization of the concept. The huge number of ads will be removed and the users won’t be assaulted by endless super offers that in fact, in the majority of cases, hide unfair proposals.

Zurker is still in his infancy (more correctly, it isn’t still born), but it’s posted on their official website that any new decision regarding the evolution of the network will be the result of the appreciations of the majority of the users and not of the principal stockholder.It’s something new and at the same time it works as a magnet for everyone…you have a saying in the evolution of the community. Sounds great, doesn’t it?

These great features are interesting enough to make anyone seriously embrace the ideas behind Zurker. It’s true that it is still perfectible, but the great amount of money invested into its development is a clear sign that it is a potential new worldwide network. What are you waiting for Join Zurker and your shares rightaway.