A bid to simplify app designing

The seed was sown by Apple in 2007 when it launched its first iOS-based iPhone, sooner  popularity of the App Store started increasing significantly. App Store had more than 58 million users by the fall of 2009 with the total apps downloaded hitting a gigiantic figure of 280 million. Don’t forget the present market leader Google’s Android, which launched Android Market (now Google Play) in October 2008. Today, App Store and Google Play are successfully leading the apps market with over 600K apps for their users. Their success stories are not even half written yet, for they are expected to create many more wonders in the world of mobile usability. Therefore, it gets very hard for the designers to create an app that finds a nod from the masses in this hyper-competitive world. This post is an attempt to make things easier for app designers with some useful app designing mantras.

Before getting to our key points we’ll give you a brief about the basics of an app – aiming to pave the way for you from the moment you start thinking about designing an app. What is your objective before designing an app?

Is your objective really one of them or something similar? Think deeply, don’t you find them all vague? And do you really know what you want if you think this way? What we’re trying to say is have a clear picture in your mind about your aim. Talking about aim, there are three things that you need to keep in mind: use, user-friendliness and meaning. By use, we mean what your app is designed to do – it can be a weather forcasting app or anything else. Ensure that its target audience should find it useful at the time they need it. By user-friendliness, you know what we mean and you also know how important it is in making your app viral. By meaning, we don’t mean you should be able to define an app before releasing it, but its users should find some meaning in it so that they develop a relation with it, which will keep them coming back to it.

Home Page conveys many things, so must provide one. 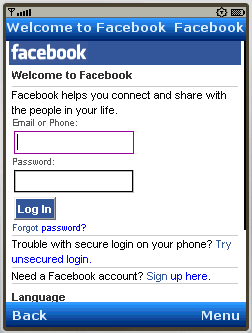 Suppose you go to a hotel that doesn’t have a reception. How would you feel? With whom will you converse about what you’re looking for? By the same token, a homepage acts as a guide for your application, giving your users a gist of what all they can do with that app. Without it, your application would look meaningless and irritating.

Suppose in this Facebook app homepage, Facebook first lands you on some random blog and then somewhere in the corner provides you with a login link, what would be your reaction? 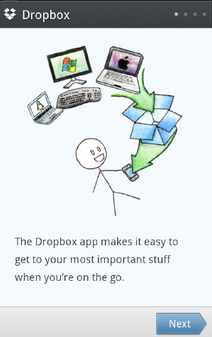 Dropbox app’s homepage is a simple, yet compelling one and doesn’t misdirect its users in any manner. So, you can also try for something like this. But ultimately the design of your home page should depend upon the nature of your app and your target audience. Just make things easy and compelling for them and they’ll embrace your app in return.

Do you know where a user will use your app? 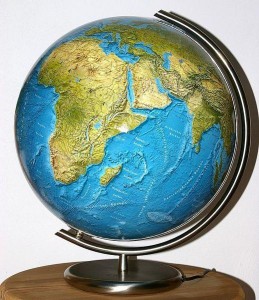 When it comes to using an iPad, iPhone or Android-based device, a user can use it anywhere – sitting in a restaurant in Paris, sitting at home in New York, etc etc. So, think would the requirements of the user sitting in Paris would be similar to that of the one sitting in New York? In short, think about the places where your app can most likely be used and leverage it accordingly.

Is your app functionality simple enough?

Talking about app functionality, the first thing that strikes the mind is navigation. Over-the-top navigation is a strict no unless your app is a game or something alike. And if you want to play with the traditional navigation, kindly make usability the first and foremost concern for the sake of your app. 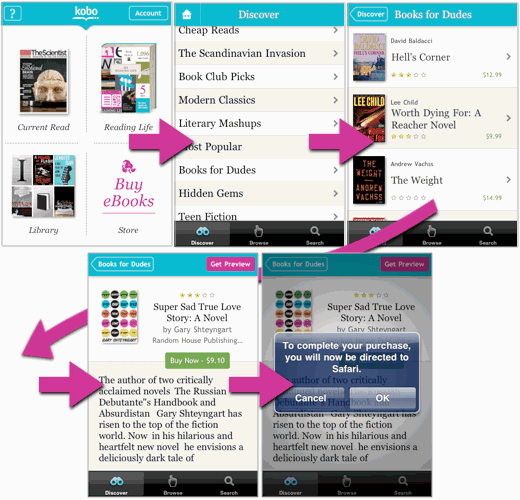 Will you think twice before using an app with so simple functionality? (Courtesy: booksprung.com)

Another major functionality-based thing is that you must be clear about your objectives regarding a particular app. What is your target audience? Do you want to want to integrate it with social networks and other apps? Ask yourself such questions, for they’ll not only help you in building a better app, but will also add on to its simplicity and functionality as everything will be clear in your mind. And you must have experienced the apps that easily enable you to do multitasking – don’t you love them? Similarly, make your app loved by the users simply by keeping user-friendly functionality.

You know a device, especially tablets, can have multiple users, don’t you? 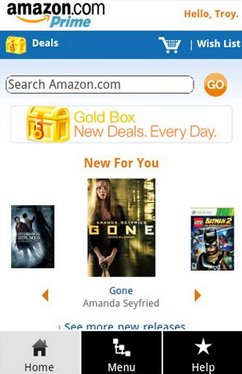 Amazon app knows who you are!

Yes, while designing an app, keep in mind that its users can be multiple. So, there can be cases like the user’s family member or friend is using the device, one of the problems is that though all apps allow users to switch accounts, many don’t usually indicate who’s currently logged in. Obviously, this can cause confusion among the multiple users, and who’ll be blamed ultimately – your app!

To put everything in a nutshell, we’ve discussed some pivotal things that app designers must not miss out on in order to create a successful app. We hope that after reading this post, your app designing approach will take a turn for good – and plunge in the right direction.