Creating a good web page is one-tenth inspiration, nine-tenths perspiration. So when you’re working way at the coal-face – slaving to produce a web page that wows – you need tools that perform well, so as to save some of that perspiration. As a web designer, the tool most likely to be in your hand is an HTML editor. Thankfully, these days, there’s quite a lot packed under the hood of the average HTML editor. Whereas we once coded HTML with simple text editors, now the best tools have WYSIWYG editing, previews, and provide code assistance tools for a multiplicity of web page languages for you. And some of best are even gratis – as this selection of the top free HTML editors shows. 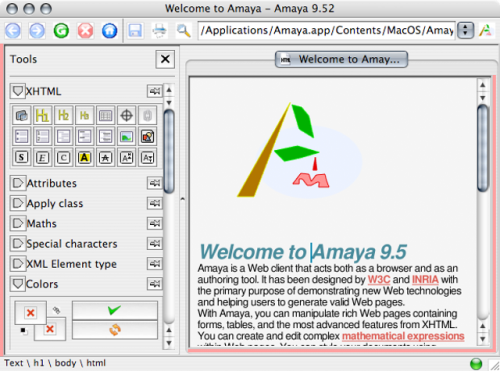 Amaya is a web editor with some staying power – its roots go back to the mid-90s, when the internet was a mere toddler. But this editor is no stick-in-the-mud. Being an open source application written by W3C (the web’s standards body) Amaya is being reworked continuously. Naturally enough it is up-to-scratch with the latest web standards. It also supports XHTML, MathML and SVG out-of-the-box, as well as the latest versions of HTML and CSS.

Like many HTML editors, Amaya opts for a split-screen view, with a WYSIWYG pane showing your web page, and a text pane showing the code that builds it. It also displays a nested tree structure of all the elements of your web page, making it easy to navigate, and aiding your understanding of how it all fits together. As you enter code, Amaya checks it for syntax and other errors, and immediately flags up problems – a very helpful feature. The main drawback of this cross-platform HTML editor is the lack of pre-packaged templates – you have to knock your code up from scratch. That makes it less than ideal for beginners. But if you want a solid up-to-date tool, and know your way around HTML, it’s perfect. 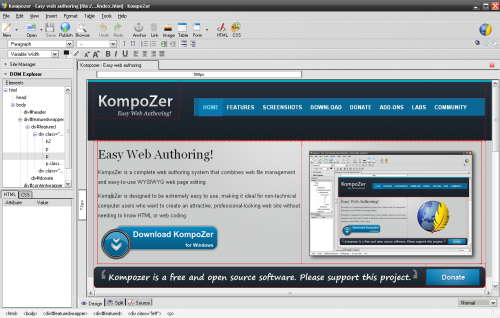 Another long-in-the-tooth HTML editor, Kompozer is in fact a repackaged free version of open source utility Nvu. As such, it’s another tool with a fairly heavy feature-set, with both HTML and  WYSIWYG editing modes, that you can flip between. Its text editor does an admirable job at formatting and validating HTML and JavaScript as well as CSS. It even parses the CSS, to load up the class selectors, letting you drop styles onto the HTML page with ease. Also well-implemented are the table and form management features. These allow you to simply snap tables and tricky UI features onto your web page.

The ability to preview using the Gecko engine (used by Mozilla Firefox) is real bonus. But some will find the lack of support for CSS column layouts irritating –  as the workarounds to get columns working can be tedious. XML and PHP support is also minimal, and the interface in general is a little bare. Put those considerations to one side, though, and if your meat-and-bread is HTML and CSS, then this is a good free editor. Kompozer is available for Windows, Mac OS X and Linus systems. 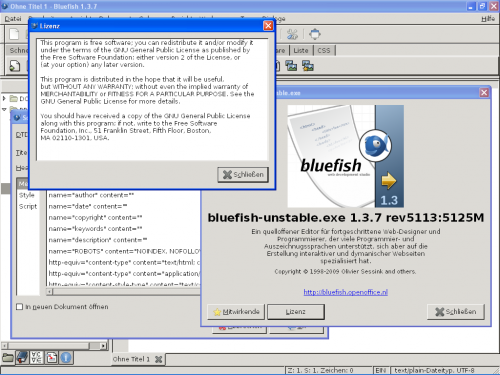 If you are one of the increasing numbers of web designers using Linux to develop websites, Bluefish may be the HTML editor of choice for you. Developed first-and-foremost for Linux, Bluefish provides an very much enhanced HTML editor environment. In fact, it has all the features you’d expect from a programmer’s IDE – formatting, spell-checking and auto-complete come as standard, for example. You also get the sort of project management features that software developers are familiar with.

Bluefish has excellent all-round support for a number of web languages apart from HTML –  including PHP, CSS, XHTML and XML. What you don’t get, however, is a WYSIWYG screen for editing your web pages. Some may consider that a curse; but plenty of web designers will see it as a blessing. Visual code editors can produce notoriously bloated and messy HTML. And Bluefish has a good dollop of documentation – plus wizards and dialogue boxes – to support your coding efforts, so you’re far from being left on your own. Recently Bluefish has been made available for Windows and Mac OS X. So now all of us can try out this slick ‘coders’ HTML-editing tool. 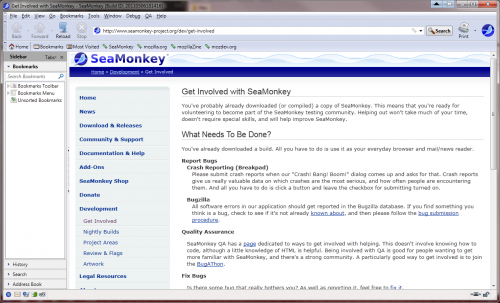 SeaMonkey Composer actually comes as part of the overall SeaMonkey suite, which includes a web browse and chat client – and is a descendant of Mozilla’s Composer (as is KompoZer of course). What you get with SeaMonkey’s take on HTML editing is an easy-to-use, graphically-orientated experience. So most editing is done through its WYSIWYG screen elements, letting you blend text and graphics, mess about with colors and styles (using CSS) and insert tables.

There is no support for form types of elements (such as buttons and check boxes), and XML is left off the list too. That said, if you want to knock up HTML web pages quickly, without being an expert in HTML, then SeaMonkey Composer is ideal. It runs on Windows, Mac OS X and most Unix versions, including Linux.

Aptana is one of those rare things – both an open source tool and a commercial package – thanks to its dual licensing policy. That means that those of us looking for a cutting edge HTML editor – which is also free – get to have our cake and eat it. As well as a very decent HTML editor, you get native CSS, JavaScript and PHP editing support too. All of the editors come with syntax-based formatting, assisted entry features (such as auto-complete and code snippets) and the HTML editor has a nice tidy-up tool.

While Aptana does lack a proper WYSIWYG editor, it does have a WYSIWYG previewer, which can be run from the code editor, to get a feel for how the page is going. But what Aptana does have is support for top-notch development tools – Ruby on Rails, and Adobe AIR – via plug-ins That is something that takes it several blocks away from your average HTML editor. Aptana is based on the Eclipse web development platform, and runs on Mac OS X, Linus and recent versions of Windows.

Wozniacki is the co-author of an ebook titled Ripped Cut Buff, which offers tips & workout routines on fitness training.