How to Use Optical Illusions to Gain a Reader’s Attention

There is nothing like a great optical illusion to really get someone interested in a website or an advertisement. Optical illusions have this way of grabbing a reader and making him/her really think—a dream for any company owner. After all, what company doesn’t want to create an ad that makes it hard to look away?

For those who are unfamiliar, and optical illusion is a way to trick the brain into either seeing things that don’t exist, seeing things in two different ways, or perceiving things as something they are not. What happens is the eye looks at a picture, processes the information, and then sends that information to the brain to form a conclusion. When looking at an optical illusion, the eye and the brain and sometimes process the image differently. Take this famous Edward Adelson example below for a better understanding:

If you were only to look at the photo on the left, you would say that square A is darker than square B, right? However, the proof on the right proves that these squares are actually the same color. This is an example of how relativity to light and shadows can change the way something looks to the eyes and to the brain.

Most would agree that optical illusions have a way of getting someone interested, yet they are not used for business purposes in many situations. Most of the time, optical illusions are used as a simple form of entertainment.

However, there are tons of opportunities for businesses to use optical illusions as a marketing tactic. Consider the photo below: 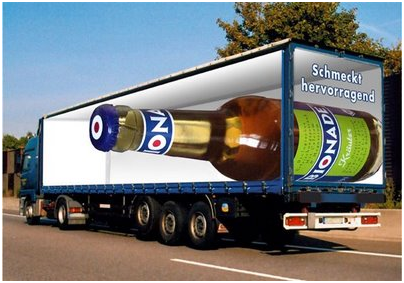 This is an image of a semi-truck in Germany that used an optical illusion to grab the attention of drivers. Although this may be a bit distracting for someone to contemplate while driving, the idea is there. It gets people interested, it’s fun, and it creates buzz.

The photo below shows a painting on the floor in Stockholm in the main city square. It looks as though the man is going to fall into a large hole, but as you can see from the girl standing on the left, this is nothing but an optical illusion created through the design: 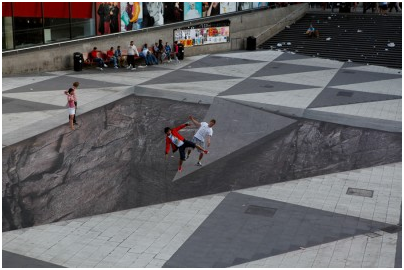 This is considered one of the biggest tourist attractions in Stockholm, so although it wasn’t necessarily a business move, it does prove that people are drawn to these types of illusions.

Below is one of my favorite optical illusions that proves it doesn’t take a genius to create one or use one for marketing purposes. This photo shows a man and a woman lying down at the bottom of a staircase. If that woman were holding something or wearing something with a company logo, don’t you think people would take a second look? 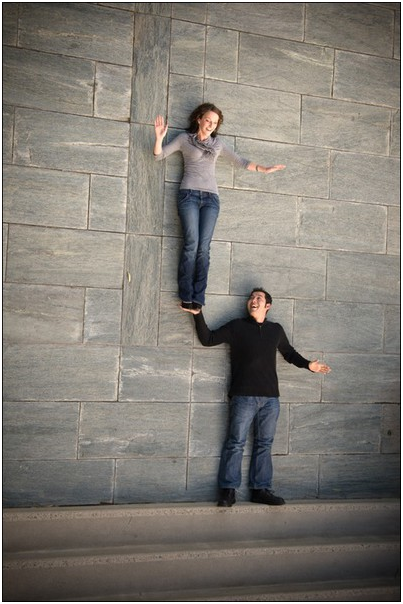 Ultimately, I feel that optical illusions illustrate the power of design. They are a creative way to catch the attention of those fast moving consumers, and they don’t have to be expensive to create.

Do you know of any cool optical illusions? How can they be used for business?

Amanda DiSilvestro is a writer on topics ranging from social media to credit card processing. She writes for an online resource that gives advice on topics including VoIP phone systems to small businesses and entrepreneurs for the leading business directory, Business.com.