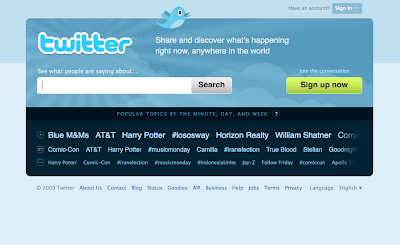 Search Twitter in realtime – see what the world is doing right now.

WhosTalkin
WhosTalkin is a tool that allows users to search for conversations on the topics they care about most.

Twitter Search
Search Twitter is an excellent search engine that allows you to find out what’s happening in the world beyond your personal timeline.

Twitscoop
Input a Twitter username or keywords in the Twitscoop search box to track a conversation, topic or conference.

twitSeeker
twitSeeker is an alternate search engine for finding Twitter users and browsing the results in one interface.

This site provides you updates from the top Twitter personalities. Yes, it took us a lot of tries to take a screenshot without Scoble in it.

With this, you can check how many time a particular word appear on Twitter. You can compare upto five words and see the results in bar graphs.

This is an useful service to get updates of your shipment using Twitter. It supports FedEx, UPS, USPS and DHL tracking codes.

You can create a group Twitter feed with Tweetpeek.

TwitBuzz is a service that follows the links, messages,and users on Twitter and displays them nicely

Tweetafile brings an important email functionality to the simple world of Twitter – attachments. Through Tweetafile, Twitter users can send any files (images, PDFs, Docs, videos… whatever) to all of their followers or via direct message to individuals.

FlashTweet is a mass follow tool that simplifies the process of adding your twitter friends. You can see who you are following that is following you back, mass follow users based on search terms and even unfollow multiple friends at once.

TwitTangle is a free service that helps you untangle the mess of having too many friends on twitter.

Helping you find great people and followers relevant to your interests.

Using twalala, you can filter tweets out of your stream by keywords and phrases or mute individuals who get a bit too chatty.

Interesting visualization of your followers and their followers.

It’s a good tool to avoid a blast of tweets from a conference you are not attending… just snooze the conference goers for a few days.

Tired of shallow e-mails from Twitter when someone follows you? Want to know more about the people who are following you? Twimailer is a free service that delivers that information right to your inbox!

MyCleenr is a unique way to sort your friends by their last tweets.

Bulk management of followers and those you are following.

Tweepler Is an easy, more enjoyable way of processing your New Twitter Followers.

TweetSum does one thing and does it well: we show you at a glance who’s following you, give you the tools you need to decide whether you should follow them back or not.

Twitoria finds your friends that haven’t tweeted in a long time so you can give them the boot!

Mutuality is a simple service which allow you to make bulk operations with your account.

Twitterless tells you who stops following you and graphs your follower history over time, making this info available in a variety of useful views.

Your Twitter Ratio is the ratio of your followers to friends (or people who you follow). It is measured with the TFF Ratio (Twitter Follower-Friend Ratio).

Find and Follow Twitterers with similar interests to you.

Everyone wants more friends. We just make it easy.

only go here on your phone

Twitter2Go
Twitter2Go provides a quick and simple way to update your Twitter status.

Tapulous
Discover, connect with and send messages to people nearby. Upload photos and update your Twitter account.

Twittelator
Twittelator is an all-around great new application for your iPhone.

TwitterFon
TwitterFon is a simple, clean, easy to use and super-fast Twitter client for your iPhone and iPod Touch.

iTweet 2
iTweet 2 has built-in auto-refresh, search and hash tags. You can view user bios and locations and also view conversations with the “in reply to” links.

GPS Twit
Run GPS Twit on your phone to make it easy for your friends to find you.

Hahlo
Hahlo is an excellent and fully featured Twitter client for your iPhone and iPod Touch.

PocketTweets
PocketTweets is a Web-based Twitter client for the Apple iPhone.

TinyTwitter
TinyTwitter works on any Java-enabled device and any Windows Mobile Pocket PC or smartphone.

TwitterBerry
TwitterBerry is a mobile client for posting updates to Twitter from your BlackBerry.

twitxr
Share pictures and status updates from your mobile.

The Mac’s finest Twitter app? Many of it’s users think so, with an intuitive interface and great features such as a conversation tracker and threaded DM’s, it’s the one to beat! The Twitter equivalent of driving a Rolls Royce to work Simple, minimalist app, allows you to tweet with a minimum of fuss One of the best desktop twitter apps out there. Tweetdeck helps you sort your friends and followers in groups and also helps you manage replies, DMs and search results.

Adds the TweetMeme button into your posts and RSS feed.

Integrate TwitterCounter.com badges on your blog to display the number of followers you have on Twitter

Twitter for WordPress displays yours latest tweets in your WordPress blog.

Show tweets that mention your post as “tweetbacks” in your comments section. 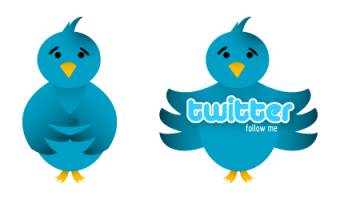 Not so much a tutorial but a clever video explanation of what Twitter is and what it’s for. Worth watching.

Excellent, concise 5 steps to being set up on Twitter.

Step by step tutorial to create your Twitter background image with Photoshop.

Yonkly – very simple, fast yet In my opinion better then twitter.

you a nice fancy box with your latest twitter updates. Very simple configuration; Just put in your Twitter username in the module and the amount of updates you want the module to show. That’s it.

Another Tweet module that can show your latest tweets or it can show a query based on the word(s) you put in the module’s configuration. Graphically I have to say this is a good looking one. In the configuration you can set avatar size, tweet count, display link text and some nice text features like: “I said”, “I replied”, making it a more human looking list of tweets. Recommendable for showing your tweets on your Joomla pages in a nice and graphical way.

A very effective Twitter module that shows the latest user Tweets in your website. Quick and easy configuration. Basically fill in Twitter username and amount of tweets to show. Also has a nice caching option. And what many modules left out, a module class suffix field. If you want to show your Tweets in a quick way, this is the module to get.

Have scavenged the net, but haven’t come across a Tweet This module for Joomla. But here it is thanks to Gnome On The Run. An effective Tweet This button in a module. Configuration of the module allows a Tweet prefix, a choice of your favorite URL service to use for shortening your url. Number of items to tweet. 12 Tweet This buttons are in the package. The buttons are nice! In our website we have incorporated this Tweet This button module on the right top of our news pages.