How do you like them Apples? An Apple Logo Roundup

There were 3 major stages in the development of the apple logo.

The original logo was designed way back in 1976 by Ronald Wayne, who was also the 3rd co-founder of Apple, though he gave up his shares for a mere $2300 soon after the company was founded.

The logo itself represents Sir Isaac Newton sitting under an apple tree and the inscription around the logo reads, “Newton …  A Mind Forever Voyaging Through Strange Seas of Thought … Alone.” This logo only lasted a year.

Steve Jobs commissioned designer Rob Janoff to develop a modern logo based on the idea of the apple which fell on Newton’s head leading to the theory of gravity. Rob Janoff then created one of the most recognizable and iconic logos in corporate history. The bite in the apple was so that people did not mistake it for a tomato and also for the play on the word “byte”. Though he said that there was no real reason for the stripes apart from the fact that Steve Jobs wanted a colorful logo and that the green stripe worked best on the top as a leaf was present there. This logo represented apple for 22 years before it was updated in 1998.

The new logo retained the original shape of the earlier logo to maintain consistency. However, it did away with the rainbow colors as a way to make it easier and more appealing when used across various products and media. The earlier logo had begun to look out of place on the trendier new iMacs that were being produced, for example. It afforded Apple greater flexibility when branding its products. Apple often uses the logo in different colors on its products.

Creativity with the Apple logo, however, is not limited to the company itself. People across the globe have used this iconic logo in various avatars over the years.

Above we see an Apple logo created out of iPhone cases. 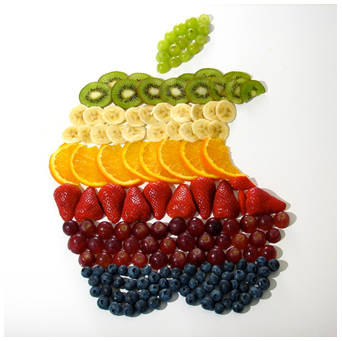 Here we see the Apple logo created from some delicious summer fruit.

Now this is really ingenious. A Japanese fan of Apple Inc. actually developed a method to have the Apple logo as well as other Apple symbols tattooed onto real apples. He did this by applying a sticker to each fruit one month before harvesting. The area covered by the sticker acted like a stencil imprinting the symbols onto the fruit. 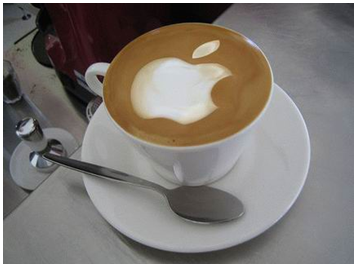 Maybe you’d like an apple with your morning cup of coffee? Well the person who created this Cappuccino sure did.

Perhaps you prefer “iCakes”. Here we see a fancy wedding cake and a cupcake both with the Apple logo. Yum – who knew Apple could taste so good! 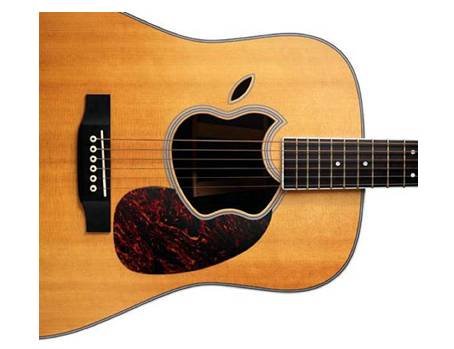 And finally, why can’t Apple have a little fun with their own logo too? Apple recently concluded their music-themed event where they announced some really cool new versions of the iPod. But before that they sent out some invitations with this cool C.F. Martin Dreadnought guitar with a sound hole in the shape of the Apple logo. Rock On!!

Vineet Kothari is CEO of MyCorporateLogo.com, a website and company logo design company offering affordable logo design packages.  Vineet graduated from the University of Pennsylvania’s Wharton School of Business and has worked in the digital design industry since 2005.