Is Designing A Character “The Real Demur” For You?

I understand, character designing is a big question!

Whether you are a developer or a designer “Character design is a tricky beast to tackle”. But, don’t worry, I have pocketed the easy character design tips for web developers and designers, that will help ideas turn in a real-life object.

One knows how to sketch a character, but creating something of your own is something else.

You need to understand the imperatives.

It seems a plain sailing to design a character from a movie, logo, show, or even an ad, but it’s a different aspect of the coin to learn how to sketch your own character.

And to start with, one of the most crucial elements of good character design is “To Keep It Simple”. Simple drawing doesn’t mean ashen characters, indeed more time can be invested in polishing the complete scene or drawing other frames of animation.

Just rewind a little, and think about Mickey Mouse 3 fingered hands. The decision was taken to save production’s time, which allows more cartoons to be produced at a more rapid pace. And as an invention, it is now one of the Disney mascot’s iconic feature.

Undoubtedly, simplicity is the key but character designing is a lot more than that. It’s just you need to do a little homework, and figure out what to be scoped, what should be downplayed, what will add a sense of personality and the list goes on.

“ A Great Character Is An Outcome Of Hours Of Careful Thoughts With Multiple Design Iterations”.

In the world of web designs, illustrations are developing their own trends. For example, nowadays the trend of showing cartoon in the hero section is the trendsetter. You can easily spot this trend almost everywhere.

The reason is simple, both old and young like cartoons. Cartoon characters make people inquisitive and they make difficult things easy to understand. That’s why cartoon character is the perfect choice for the websites that have a non-tech savvy audience to simplify explanations.

Sometimes this turns a daunting task, especially if you are a newbie. To help you ace the traits, I have clutched some character design tips that will be a boon to develop amazing characters for your project. 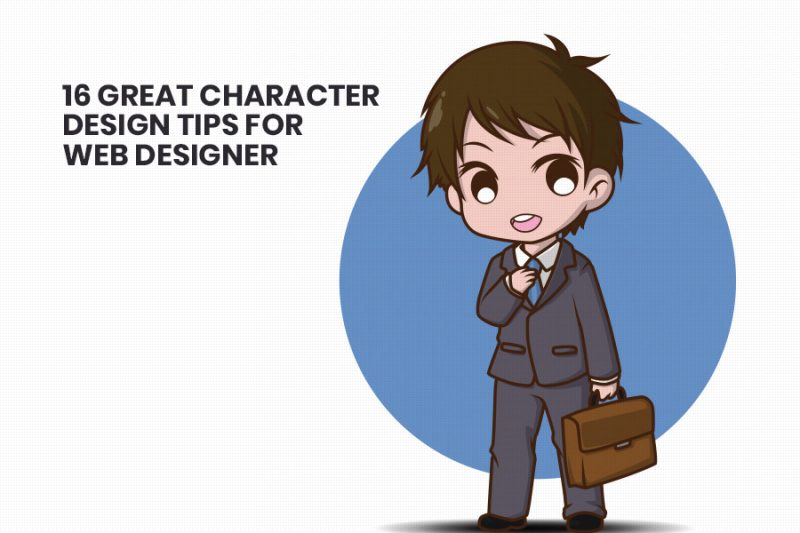 Tip 1: Determine Who It Is Aimed At

The first and foremost thing of your character design process is to decide on who your character is trying to allure to. Characters are usually meant to appeal to young toddlers, for instance, bright colors blend with simple basic shapes.

But, if you are developing a character for a client, many of the vital aspects are already decided. Understanding the targeted audience, is one among the vital aspects, as that means you have a better approach to design character based on the audience’s taste.

Tip 2: Discover Where The Character Will Appear

Look for the platform where the character will appear and in what medium. As you know, the cartoon character’s designs are a lot different from mobile game character designs.

Let’s have an example, mobile game characters are not in the need for precision and fine detailing, since they will not be viewed closely. Whereas, a cartoon character will need to be more precise and detailed, depending upon the type of cartoon.

Tip 3: Learn & Study Other Designs Too

Have you ever given a thought why all the designs are not successful?

Take your time and figure out why not all the designs get a successful launch. Time to have a look around.

Possibly, you will find characters in every type of advertising, like products, services, company mascots, movies, show characters for clothing — the character design is everywhere.

All these questions will help you improve your own character design ideas and skills.

I agree unique characters are quite onerous to make. It requires thousands of iterations for any kind of character you imagine.

Just whim about all the cartoon dogs, monsters, robots you have seen. On the scent, you will also need to create a strong and interactive character design to make it stand out in the crowd.

Give your audience a reason to remember you. Offer something unique.

Just alike Simpson has yellow skin, which grabs everyone’s eyes while flipping through channels. You also need to research on the kind of character you are creating before finalizing it.

Sometime, you may end up accidentally sketching a famous character design and need to make some more tweaks to create a truly unique character.

So, before you begin with creating “One-Of-It’s” own kind of design, make sure to hire the web developers that eliminate the chances of any tantamount.

Tip 5: Add A Dab Of Personality

While an exciting character design can make space for some really nice artwork, it’s never enough. Rather, this is a great place to start as the personality adds great character design motivation.

People relate to personalities more than they connect to alluring visual designs.

Therefore, an interesting and intelligible personality will make an everlasting impression of your character on people.

Tip 6: Be Sure To Make Everything Clear

At times, all you need to do is be “Honest”; and, make everything “Clear” in every web design.

As a matter of fact, websites are see-through to convey to the audience what you see is what you get! So, make sure your honesty should be inevitable. To keep your user away from confusion, the illustration used should clear things from the beginning.

Tip 7: Include Routine Things With Animation

Working with animation is a popular trend now. A myriad kind of animations is used for catching user attention. It’s not compulsory to use big animations, even small and smart animations can do wonders.

Create animations for your project keeping in mind the objective in such a way they support the brand.

What else can make your character unique?

Your character’s distinctive body shape helps convey their personality. You should be capable of picking the outline from a conventional lineup.

You should also pay attention to the species of your character. And, if you are having issues in determining what your character species is, try and create your own.

An interesting tip, create a character’s head separately from their entire body. Then draw at least three different body types on different papers and align them one after another and decide on one that looks great.

The kind of line you use says a lot about the kind of character people are looking for. Especially for simple yet cute characters, try to use combination of thick, soft, round and even lines.

Even, the leading software development company use more craggy and honed lines to convey a more sluggish and erratic character.

It’s not the game of design and lines. Indeed, color plays an important role in communicating character’s personality.

Usually, people relate dark colors like Black, Purple, and Gray with shadow type of characters. While light colors like Pink, Yellow, White, are associated with good guys and pure intentions. And, bold colors lends towards heroism.

Clothing and accessory help in making the traits of a character. They are the fundamentals of character design like:

The things we use are a reflection of our personalities. It makes your character more relatable and believable if they are accessorized with the things that matter to them and express who they are.

The vital tool for character design development is to know what you should exaggerate to best appeal the character to the audience. Character design is a scoop of abstraction of real things.

In the character world, conveying a personality is more important than creating entire anatomy.

Tip 13: Expressions Is The New “Trendsetter”

One among the best way to study expression is to sit in front of the mirror and express different emotions on your own face. Show what being cheerful, glum, furious, angry, looks like.

Even, you can also imagine how will your character react in a certain situation and work on their expressions for particular situations.

Tip 14: Remember To Keep It Simple

As complex as your character design gets, remember that people should be able to easily break it down. But, if it’s turning a daunting task to get across the shape of the character and clothing in less than 10 strokes, you need to work on it to make it more simplified.

Keep in mind to make the character consistent throughout all this. So, to make them accomplished in different scenarios, an over-complicated is not the right choice.

Keep it simple keep it accomplished.

This is how it goes! Start following a character design tutorial to have a grasp on the basics, but as you accomplish, try new things too. Work on creating a character that looks soft and accessible but is erratic.

So, try to create a character who has a crazed smile for every situation. Eventually, you will give life to a successful character design.

Tip 16: Fine Tune Every Nook Of Your Character Design

Irrespective of how much simple your character design is, question every choice you have made. This becomes even more important for a simple design because the simple design has few features.

Keep sure, all the lines and features are clean and clear. You should also decide which part requires more precision and which needs to be down-played.

Every feature should be thoroughly thought of, no matter how small it seems.

In The End… Whether it’s designing your website or designing a character, there is nothing wrong to lighten your mood by adding a little dab of characters, illustrations, and sometimes animation.

So, to make a small character a powerful tool to hold the users, hire software developers that let you achieve this right way. Aligning with the right software development company, they craft the bridge to fill the gap between you and your user to proffer them with unforgettable user experience.

After all, a character designer gives meaning to your design and characters, gives them a life and then flesh out their look.