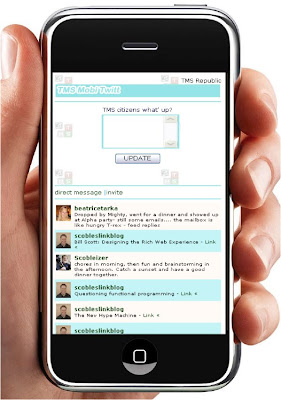 Twitter supports mobile and here a Collection of tools to use Twitter and browsing it on your mobile phone.

Several versions of Tiny Twitter are available including MIDP 1.0, MIDP 2.0, PocketPC and SmartPhone.

Slandr uses the Twitter API to offers a browser based mobile Twitter service at http://m.slandr.net Slandr offers an enhanced Twitter experience with replies and direct messaging.

How better to tweet than to Quakk? Quakk, as the description says is a windows mobile Twitter client which now supports Tweeter Tags. Quakk requires the .NET Compact Framework 2 for Windows Mobile 5.

Blackbird has both over the air download and BlackBerry application loader install versions available and is currently up to version 0.5.21 (as of 12 February 2009).

There is a desktop version of twibble but twibble also has a mobile version called “twibble mobile” – a Java based client primarily aimed at Nokia, Blackberry (although it is recommended to upgrade to Blackberry OS v4.5) and SonyEriccson mobile devices.