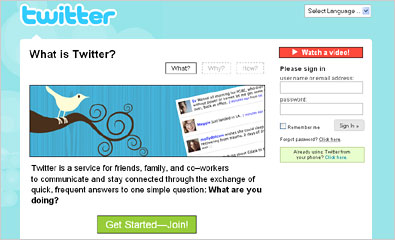 Twitter, which was created by a 10-person start-up in San Francisco called Obvious, is a heady mixture of messaging, social networking, “microblogging” and something called “presence,” shorthand for the idea that people should enjoy an “always on” virtual omnipresence.

Twitter’s rapid growth made it the object of intense interest and a fair amount of ridicule, as it was derided as high-tech trivia or the latest in time-wasting devices. But its use in Iran in the wake of the disputed presidential election of June 2009 to organize protests and disseminate information in the face of a press crackdown brought it new respect.

When a user is logged in through the Web or a cellphone, it asks one simple question, “What are you doing?” Users answer in 140 characters or less. While some of these “tweets” have the profundity of haiku, most are mundane, like “Sure is pretty out tonight” or “My eyes itch. I am very aggravated.”

Unlike most text messages, tweets are routed among networks of friends. Strangers, called “followers,” can also choose to receive the tweets of people they find interesting.

In its short history, Twitter has become an important marketing tool for celebrities, politicians and businesses, promising a level of intimacy never before approached online, as well as giving the public the ability to speak directly to people and institutions once comfortably on a pedestal.

But someone has to do all that writing, even if each entry is barely a sentence long. In many cases, celebrities and their handlers have turned to outside writers — ghost Twitterers, who keep fans updated on the latest twists and turns, often in the star’s own voice.

It is not only celebrities who are forced to look to a team to produce real-time commentary on daily activities; politicians like Ron Paul have assigned staff members to create Twitter posts and Facebook personas. President Obama’s campaign used Twitter, Facebook and YouTube although Mr. Obama has not tweeted since being sworn into office.

In 2009, people in Iran and Moldova created their own searchable tags on Twitter to organize protests against their governments and share information with each other and the world. In April, Moldovans used the network to rally more than 10,000 young people against their country’s Communist leadership. And in June, Iranian opposition supporters angry over presidential election results used Twitter and other forms of new media to share news on rallies, police crackdowns on protesters, and analysis.

With the authorities blocking text-messaging on cellphones, Twitter has become a handy alternative for information-hungry Iranians. While Iran has also tried to block Twitter posts, Iranians are skilled at using proxy sites or other methods to circumvent the official barriers.

On June 15, a State Department official e-mailed Twitter to request a delay in scheduled maintenance of its global network, which would have cut off service while Iranians were using Twitter to swap information and inform the outside world about the mushrooming protests around Tehran.

Twitter complied with the request and briefly postponed its upgrade. The episode demonstrates the extent to which the Obama administration views social networking as a new diplomatic tool. Secretary of State Hillary Rodham Clinton talks regularly about the power of e-diplomacy, particularly in places where the mass media are repressed.