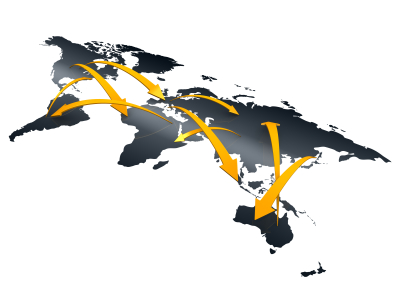 Providing content that is well-written in your own language is the best starting point for designing a good multilingual website. The next most important step is ensuring that the content is accurately translated. You can use online services, like Google Translate, which have the benefit of being free to use, but for the best results you need to hire a professional translator.

Layout and design is an important consideration when building multilingual websites. One of the main issues here is that not all languages are read from left-to-right. This can impact on the usability of side navigation and sidebar content. For example, a left-hand navigation structure could be rather inconvenient for someone who reads from right-to-left. The same thinking applies to the commonly-held idea amongst web designers that the eye is naturally drawn to the top-left area of a web page. For an Arabic reader, it may be the top-right. You can avoid these usability issues with your navigation structure by employing a horizontal top navigation, which should be more universally acceptable.

Using CSS to maintain the style of your pages separately from the content is another important technique that will help you to make your multilingual websites more successful. With the content separate from the design, it is much easier to publish the same site in multiple languages. You just slot the translated text into the same design template.

When writing your style sheets, remember that characters in different languages may need different row heights and widths. Also remember that when text is translated, it may take up more space in some languages. For example, a paragraph in German may require more lines than the same paragraph in English. You should be sure to use UTF-8 character encoding, since it is compatible with the widest range of language scripts and alphabets.

Use of color is one of the most important parts of web design. But it can affect the way your multilingual websites are perceived by users in different countries. Most designers are aware of color theory, which tells us that different colors can have a psychological effect on the people viewing them. This psychological impact of color is often influenced by cultural factors. In other words, colors mean different things to different people depending on their cultural viewpoint. For example, in Islamic countries green usually has important religious connotations, whereas in Western cultures it may relate more to environmental issues. In Korea, a name written in red indicates that the person is dead. You should examine your use of color carefully to ensure that it works for your multilingual websites.

It’s not just written content that will be interpreted differently by users of your multilingual websites. There are also pitfalls to be aware of with visual content. Things that may be appropriate in one part of the world might be considered offensive elsewhere.  For example, in Western countries, it’s usually acceptable to show images of women in bathing suits or people drinking alcohol, but in other parts of the world, images like these may be inappropriate.

The same is true of many hand gestures. An image of a “thumbs up” would be viewed as having a positive meaning in the United States and Europe, but in many parts of Asia, it’s considered rude. Raising an open hand with the palm facing out means ‘stop’ in the US and Europe, but in Asia it is often used when asking permission to speak. Beckoning someone by curling your finger is often used in the West, but in Japan it is considered rude and in Singapore it means death.

It’s not just about causing offence. If you are using an image to convey meaning, that meaning may not translate well in other parts of the world. This is especially true with the use of humor.

Success in multilingual web design is about being aware of the possible pitfalls highlighted here and ensuring your websites translate well into the different languages you are targeting.